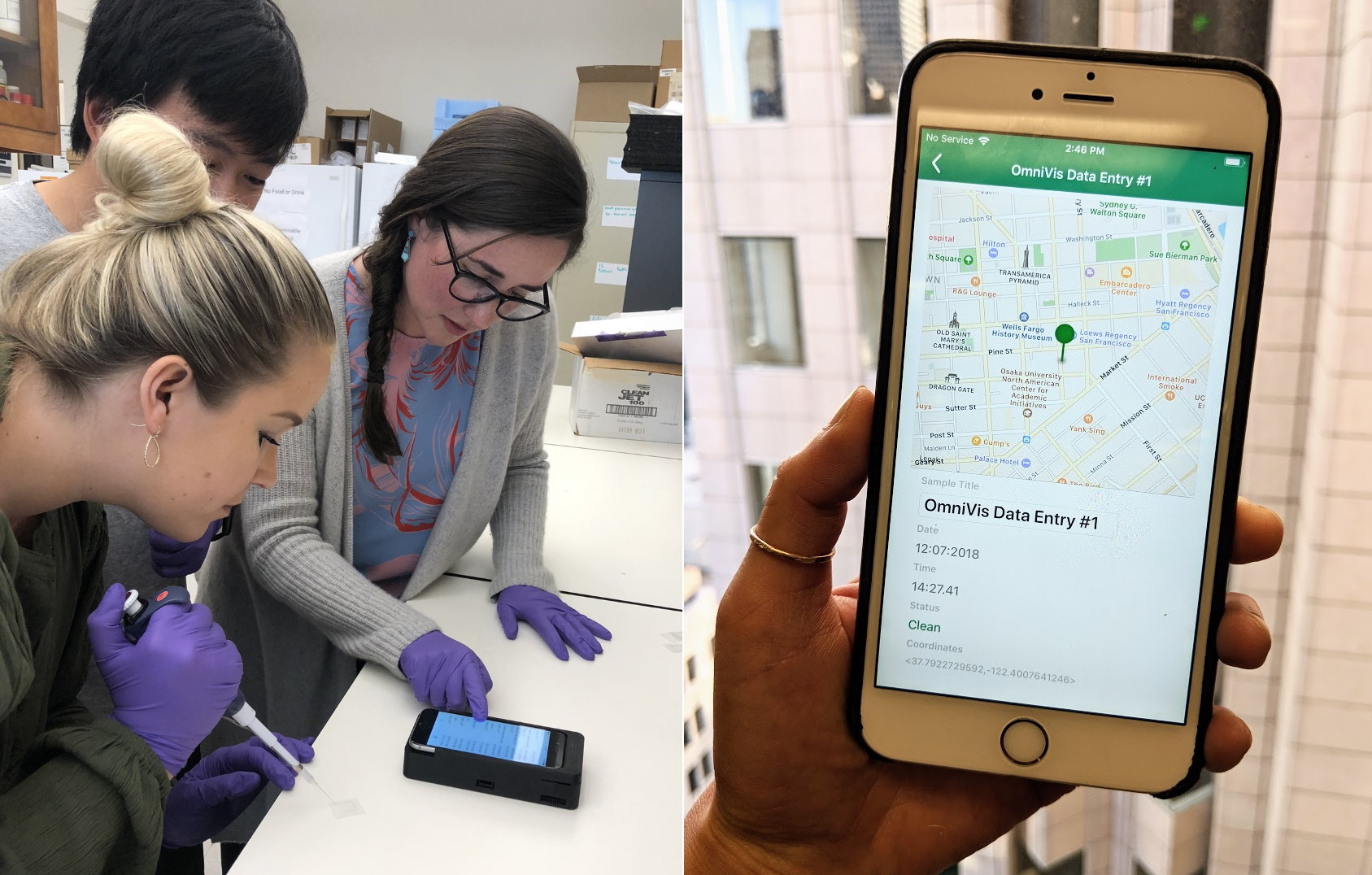 This article is brought to you by TechCrunch.com
Article author: Devin Coldewey
Article source: https://techcrunch.com/2019/10/02/omnivis-could-save-lives-by-detecting-cholera-infected-water-in-minutes-rather-than-days/

Clean drinking water is one of the most urgent needs in developing countries and disaster-stricken areas, but safety tests can take days — during which tainted water can infect thousands. OmniVis aims to make detection of cholera and other pathogens as quick, simple, and cheap as a pregnancy test. Its smartphone-powered detection platform could save thousands of lives.

OmniVis, which presented on stage at Disrupt SF’s Startup Battlefield today, emerged from research conducted at Purdue University, where CEO and co-founder Katherine Clayton completed her doctorate. She and her advisors were working on the question of using microfluidics, basically very close inspection of the behavior of fluids, to detect cholera bacteria in water.

In case you forgot your Infectious Diseases 101, cholera is a bacterium that thrives in water polluted by fecal matter. When ingested it multiplies and causes severe diarrhea and dehydration — which as you might imagine can become a life-threatening problem if a community is short on clean water.

While normally uncommon, there was a huge cholera outbreak in Haiti in 2010 following a major earthquake there; 665,000 people were infected and more than 8,000 people died. It was this humanitarian disaster that prompted Clayton to look into how such an event might have been prevented. She’s been working on what would become the OmniVis platform since 2013.

“It’s been a long time coming,” she told me.

That’s not uncommon for academic spin-offs with valuable IP but zero product experience. Moving from lab bench to field-ready hardware has taken years of hard work. But the resulting device could upend a costly and slow water testing process that leaves communities at risk in crucial moments.

Existing water testing is generally done at a central location, a lab run by a university, utility, or the local government. It depends on the region — and of course if there has been a disaster, it may not even be functional. Going from sample collection to results may take several days, and it isn’t cheap, either. Clayton estimated it at $100 per sample.

“But that’s just supplies and labor,” she said. “Not the cost of the lab, the PCR machines — which are tens of thousands of dollars — the pipettes, the dyes, the disposables and consumables, the training… not to mention in a lot of areas you’re not just going to walk by a nice central laboratory. Some countries may only have one or two testing facilities.”

Another option is disposable rapid diagnostic tests, more like pregnancy tests than anything, meant for use with stool samples — but their accuracy is low even then, and with cholera diluted in a water source you may as well be flipping a coin.

Such was the state of testing when Haiti had its outbreak and Clayton began looking into it. In 2013 they began investigating microfluidics as a method for detection. It works by exposing a set of chemical reagents, or “primers,” to a water sample. These primers are engineered to bind to bits of cholera’s DNA and then when heated, replicate it — a process called DNA amplification.

The more cholera is present, the more DNA will be available to amplify, and it multiplies to the point where it affects the viscosity of the water — a factor that can be tested by the device. Interestingly, the device in no way “analyzes” the DNA or identifies it; all it does is measure how viscous the water is, which is a highly reliable proxy for how much cholera was present in it to begin with.

It turns out this method is both quick and accurate: In 30 minutes it gives as good or better results as central testing.

“The worst thing we could ever do is say there’s no cholera in the water when there is,” Clayton said. So they’re focused on robust test results over all else. But ultimately the device still had to go from the lab to the real world. To that end the team conducted pilot tests in Haiti, where they worked with local NGOs and communities to get some direct feedback.

What they found was promising — but also resulted in major changes to the product. For one thing, they had to switch from iPhone to Android.

“People feel safer with Android than iPhone, which is considered a luxury item,” Clayton said. They also found that men and women operated the system equally well — the team is 84 percent women, she noted, and their design choices may have crept into the product the same as can happen on what is much more common, a male-dominated team. English and Svengali users likewise did fine. Interestingly, locals were baffled by roman numerals. “That was surprising,” she said, but illustrative of how even the smallest assumptions need to be questioned.

“I love user-centered design,” Clayton said. “I think it’s the only way to get engineering to work. UX and graphic design is not my or my colleagues’ specialty, so we had to get some outside contractors for that.”

The production device, which OmniVis hopes to ship in about six months, should cost around a thousand dollars — but at about $10 per test it will pay for itself quickly, especially considering how much easily it can be deployed and used. A half-hour turnaround on a test that can be performed by an aid worker with an hour’s training is an invaluable tool in a disaster-stricken area where infrastructure like mail and roads may be in disorder.

These devices, by the way, are not bought and paid for by the people who drink the water. Like the water-testing labs, they’ll be owned and operated by NGOs, governments and others with budgets for this kind of thing.

Cholera is the first pathogen the company is aiming to detect, but the system can just as easily detect several others simply by using different disposable tests equipped with different primers. E. Coli could be next — with the proper testing, Clayton said. And others would follow. It’s not hard to imagine an OmniVis device being a must-have for any relief work where water needs to be tested.